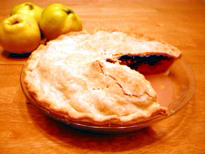 I didn't core the quince and leave them whole as described in the source recipe because I didn't have a 1 1/4 inch auger bit and a drill press. Quinces are tough critters and carving them out as directed would be a substantial task. While it isn't called for in the source below, I've added true cinnamon to the recipe. Both "The English Housewife" and "The Neapolitan Recipe Collection" contain quince pie recipes that make use of cinnamon, so it seemed an acceptable addition.

Peel fruit, quarter, core, and slice. Arrange the pieces tightly in pie shell. Mix sugar, ginger, and cinnamon, and sprinkle over fruit pieces. Cover with top crust and bake at 350°F. for 90 minutes, or until done.

Quince Pie. Prepare the dough as I have said for the other tarts; then get peeled quince and remove the hard part in their centre, and do not let the hole you make to remove it go all the way through; into this hole put good beef marrow with plenty of sugar and cinnamon; and lay the quince in the pies, adding the marrow to them inside and out; mind that it is not too salty; put another crust on top, cooking it as with the other tarts.